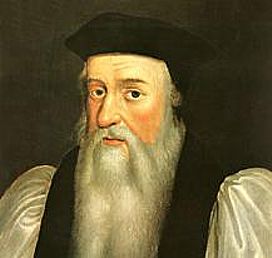 Merciful God, through the work of Thomas Cranmer you renewed the worship of your Church by restoring the language of the people, and through his death you revealed your power in human weakness: Grant that by your grace we may always worship you in spirit and in truth; through Jesus Christ, our only Mediator and Advocate, who lives and reigns with you and the Holy Spirit, one God, for ever and ever. Amen.

Thomas Cranmer was the principal ﬁgure of the English Reformation and was primarily responsible for the ﬁrst Book of Common Prayer of 1549 and for its ﬁrst revision in 1552.
Cranmer was born in Nottinghamshire on July 2, 1489. At fourteen he entered Jesus College, Cambridge, where by 1514 he had obtained his B.A. and M.A. degrees and a Fellowship. In 1526 he became a Doctor of Divinity, a lecturer in his college, and examiner in the University. During his years at Cambridge, he diligently studied the Bible and the new doctrines emanating from the continental Reformation.

A chance meeting with King Henry VIII at Waltham Abbey in 1529 led to Cranmer’s involvement in the “King’s Affair” – the annulment of Henry’s marriage to Catherine of Aragon. Cranmer prepared the King’s defense and presented it to the universities in England and Germany, and to Rome. While in Germany, Cranmer associated with the Lutheran reformers, especially with Andreas Osiander, whose daughter he married. When Archbishop Warham died, the King obtained papal conﬁrmation of Cranmer’s appointment to the See of Canterbury, and he was consecrated on March 30, 1533. Among his earliest acts was to declare the King’s marriage null and void. He then validated the King’s marriage to Anne Boleyn. Her child, the future Queen Elizabeth I, was Cranmer’s godchild. 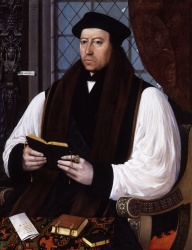 During the reign of Edward VI, Cranmer had a free hand in reforming the worship, doctrine, and practice of the Church. But at Edward’s death he unfortunately subscribed to the dying King’s will that the succession should go to Lady Jane Grey. For this, and also for his reforming work, he was arrested, deprived, and degraded by Queen Mary I, daughter of Henry VIII by Catherine, and a staunch Roman Catholic. He was burned at the stake on March 21, 1556.

Cranmer wrote two recantations during his imprisonment, but in the end he denied his recantations, and died heroically, saying, “Forasmuch as my hand offended in writing contrary to my heart, there my hand shall ﬁrst be punished; for if I may come to the ﬁre, it shall ﬁrst be burned.” 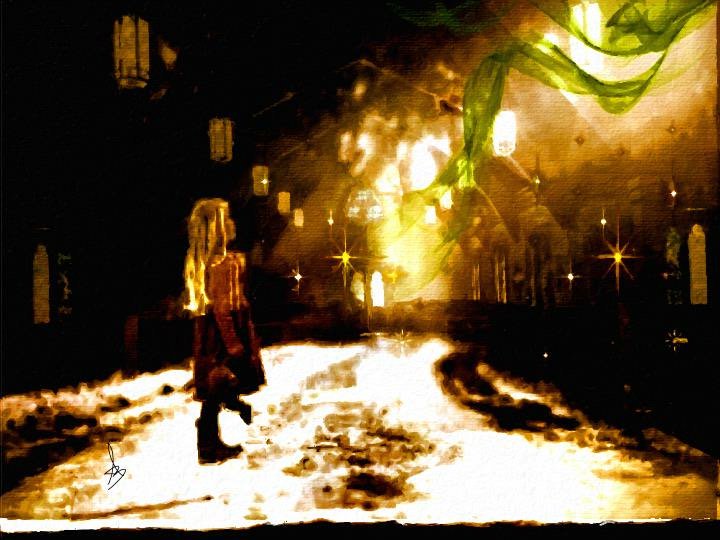